The city of Natal in the state of Rio Grande do Norte, Brazil is known all over the world for its crystal blue waters, towering sand dunes and exotic beaches that appear to go on forever. Another factor that attracts over a million tourists annually is the fantastic weather in Natal Brazil and its seemingly endless supply of sunshine.

Natal is bordered by pristine white sand beaches and huge sand dunes that stretch for 40 kilometers along the coast. Natal has a clean environment, friendly people, and is considered one of the safest tourist destinations in Brazil. For an emerging cosmopolitan city, Natal has relatively few tall buildings and moderate traffic that can mar its natural beauty.

Natal’s tourist industry is highly dependent on its almost year-round bright and sunny weather to complement its outdoor attractions and make its amazing beaches look more alluring to visitors. The city’s attractions and activities like game fishing, surfing, dune buggy  tours and camel rides in Genipabu, or just lazing around on the beach all count on sunny weather to draw in the crowd. The clear visibility of the waters for scuba diving is also dependent on bright weather.

The city’s visitors are made up mostly of tourists from the southern parts of Brazil and from other parts of the world. Foreign tourists are mostly “snowbirds” or people from colder countries who want to spend their vacation in warmer climes. Thanks to its sun-filled skies, Natal does not disappoint its guests and is enjoying the growing influx of revenue-generating tourists.

Another advantage of vacationing in Natal that’s worth mentioning is that it has the cleanest breathable air in all of the Americas according to a report from NASA. It is second only to Antarctica for having the purest air in the world. What’s more, the adorable weather in Natal Brazil has been a constant crowd-drawer for many decades.

Natal wouldn’t be referred to as “Cidade do Sol” which means City of the Sun or Sunshine City for no reason. The city is located in Brazil’s northeastermost point and approximately 6 degrees south of the equator. The weather in Natal Brazil is generally sunny for over 3,000 hours each year with a brief spell of rain. 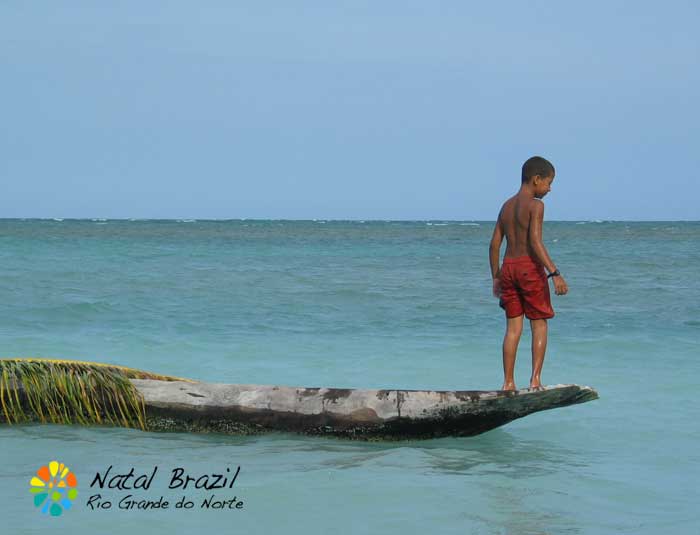 So, what is the best time of the year to go to Natal? If you are thinking of going to Natal for a beachside vacation or a romantic getaway with your significant other, remember that the best time to visit the city is in July and in the months of November through February. November is the driest month while January is the warmest. Although it is fine to visit the Sunshine City most time of the year, the months mentioned are peak season for tourists. Expect the hotels to be packed and fully booked.

Your best move to ensure that you’ll have hotel accommodation is to book a room in advance, even before the rates are jacked up at the last minute. Natal enjoys terrific weather all year round so it’s also fine to visit during off-peak season when tourists are few and accommodation rates are lower. For those who prefer less crowd and noise, off-peak seasons are times when the environment is calmer, less hectic and beaches are less littered.

The average recorded yearly temperature in the city is around 26 to 28 degrees Celsius. It generally goes up to 38 degrees Celsius during the summer months with water temperature reaching a comfortable 26 degrees. Rain occurs mostly between March and July with very rare chances of storm and other extreme weather conditions.

Natal is blessed with a wet and dry tropical climate, marked by steady high temperatures all through the year, with a dominant dry season. The months where the days are warmest (averaging a temperature of 28 degrees) are January, February, and March. On average, January has the warmest days, making it one of the best months to go and visit Natal. On average, July is the coolest month with a temperature of 25 degrees.

Natal’s rainy season starts in the month of February and ends at around May. However, most rainfall occur in February and may continue to rain up to June and July. In general for the weather in Natal Brazil, April is recorded as the wettest month.

The dry season in Natal occur in the months of August, September, October, November and December where average daily temperatures can reach 26 to 30 degrees Celsius. During these months, Natal experiences very little rainfall especially in November which is the driest month, usually less than 150 mm.

Natal’s equatorial climate, consisting of wet and dry tropical weather, has warm to hot temperatures with high relative humidity experienced all year round. However, these conditions are softened by the virtual nonexistence of extreme weather and the constant trade winds coming in from the Atlantic Ocean that provide pleasing temperatures. Nevertheless, the weather in Natal Brazil is not so hot nor too dry to encourage the development of tropical rainforest in the region as well as its staple produce, sugar cane.