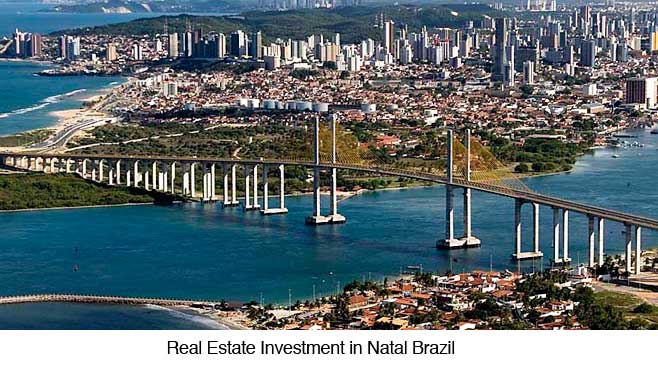 Brazil is one of the world’s best places for investors who want to benefit from its growing economy, real estate and primary housing demand. As against other locations, Brazil is still quite available in terms of real estate investment potentials. Apart from being the fastest rising economy in Latin America, it also has a stable democratic government, a growing number of young and affluent residents, and an enormous demand for quality housing.

Here are some reasons why you should consider real estate investment in Natal Brazil:

Brazil is one of the rapidly rising major economies in the world, growing by about 7.5% in 2010 with a gross domestic product (GDP) of R$3.6 trillion. It is unquestionably the primary real estate investment player of all the South American countries. Taking into consideration its buying power, Brazil has now surpassed Britain and France and could likely be one of the big five economic giants of the world. According to the Association for Real Estate and Tourism in the North East, Ceara, Bahia and Rio Grande do Norte have the largest number of investors in Brazil’s northeast region.

Brazil’s north-eastern region is gaining 20% annual economic growth and the state of Rio Grande do Norte is the location that gets the most attention from investors. The attractive combination of exotic beaches, year-round sunny weather and the US $1.1 billion invested by the government for regional improvement projects, roads and buildings make it the ideal focus of investment. What’s more, a new airport which will be the largest in South America is being built here.

Economic market indicators show high capital growth and outstanding return of property and real estate investment in Rio Grande Do Norte. The growth of its economy is overtaking the rest of the country and it is predicted to be the world’s sweet spot for residential and tourism related properties. No visa is required for most Europeans who plan to stay up to six months.

Land has already increased in value by as much as 700% in some areas. While it can still be considered cheap, demand is expected to outrun the supply, increasing the values and prices.

Natal is just seven to eight hours travel by plane from most European cities. Its year-round pleasant and sunny weather is beyond extreme climate conditions and devastating hurricanes that frequently visit Florida and the Caribbean.

Natal is one of the ten Brazilian cities chosen to host them FIFA World Cup 2014 sports event. As a result, it will invite heavy media attention, foreign tourists and major investors, constant factors that favorably affect property prices. Huge international sports events such as the forthcoming World Cup are undisputable income generators as well as the driving force behind many real estate investment.

Sao Goncalo do Amarante, a new airport in Rio Grande do Norte, is currently under construction. Upon completion, it is set to be the seventh largest international airport in the world and the largest one in Latin America. The new airport will have the capability to handle 40 million passengers annually. A dramatic boost in the tourism industry is expected, as well as better trading relations with other countries.

Plans have already gotten the green light to build a new marina in Natal. It will be constructed around the former Clube de Natal, about 500 meters from the Forte dos Reis Magos and about 500 meters into the Potengi River. It will cover a total area of 50 hectares, with enough space to accommodate 500 boats. The new marina will serve as a portal for visitors from all over the country.

Primary factors that will boost real estate investment in Natal