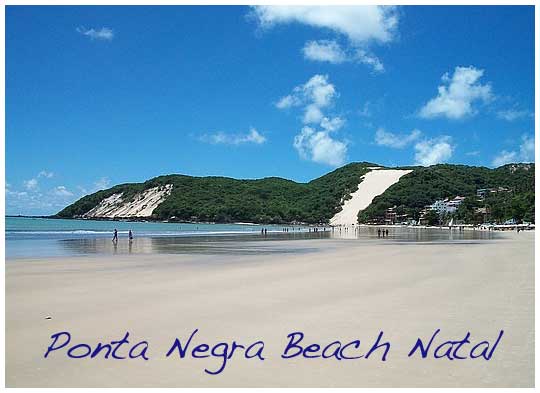 Whenever Natal is featured in travel articles and ads, it is most likely that pictures of Ponta Negra Beach will be used to represent the city’s major attractions. This popular Natal landmark has become the city’s poster image. Thus, when people think of Natal, they imagine this place.

Ponta Negra is a fishing neighborhood and a famous beach in Natal, the capital city of Rio Grande do Norte state in Brazil. This nice beach is located at the extreme south end of the city which houses a tourism-oriented neighborhood.

At the opposite end, towards the north, is Via Costeira a 10-kilometer long coastal highway that links Ponta Negra beach to other popular beaches of Natal such as Praia dos Artistas and Areia Preta. The area is entirely urbanized, full of hotels, pousadas, restaurants, night clubs, bars, several shops and other tourist facilities.

It wasn’t always like this, however. In fact, Ponta Negra beach was once a tiny village that was detached from Natal. It was a community of fishing folks and other laborers where Natal’s rich would go and spend their weekend, being just 10 kilometers from the city. In the early 1990’s, more roads provided better and faster accessibility to this area and the tourist industry started. Soon, Portuguese, Italians and other Europeans started to invest in real estate in Natal and surrounding areas and the tourism industry grew.

At present, the 4-kilometer long beach is bustling with local and foreign surfers, bathers, and families. To provide them accommodations, many medium and small hotels, flats and evan makeshift lodgings have been built in and around Ponta Negra beach. There is no more space for big hotels to build on. Hence, you can see them rising along the Via Costeira. Even residential houses in Ponta Negra are being renovated and converted into dining places, shops, bed & breakfast and other tourist facilities.

All of these commercial establishments can be found in and around the beach as most of the tourists are concentrated in that area. The neighbourhood grows as the price of real estate in Ponta Negra soar.

When you’re in Ponta Negra beach, you surely wouldn’t miss the very prominent “Morro do Careca”, perhaps the most famous landmark of Natal, an amazing 120-meter high sand dune with a sheer face that plunges into the ocean. Climbing the hill is not allowed to prevent it from getting eroded.

Very early in the morning is the time local residents surf or take a tranquil walk on the beach before they start their work day. Ponta Negra beach gets gradually filled up with people as the morning wears on. The water is very safe to swim. The sun shines here almost every day of the year and is accompanied by a gentle and refreshing breeze. Expect a thicker crowd of tourists and southern Brazilians swimming and playing on the beach during weekends and on holidays.

The sand has numerous “barracas”, huts and sun umbrellas, where visitors are served food and drink any hour of the day or night. On the waters at the distance, you will see “jangadas”(colorful fishing boats), a familiar sight in north-eastern Brazil, as they go for the day’s catch.

There are numerous stuff that people will try to sell to you in Ponta Negra beach as well as in other popular beaches in the country.

There are the “barraqueiros” who set up “barracas” – tents, beach umbrellas, and chairs – for those who will buy their products. You will be charged a fee if you don’t make a minimum purchase, so it’s best to check it out before you make yourself at home. Selling food is not allowed on the beach, so most “barraqueiros”only sell beer, soft drinks, coconut and water.

For families with children, there are the popsicle vendors. This frozen juice with a stick comes in different flavors and is a hit with kids. Popsicle is translated “picolé” in Portuguese.

Caipirinha is a Brazilian drink that is very popular with foreigners. They are easy to prepare but bars charge high for them. Not so with these carts that sell and mix alcoholic drinks which include caipirinha, cachaça, vodka, rum, plus a combination of milk and assorted fruits. They also have Hula-hula which is a drink served inside a partly-hollowed pineapple.

Various dishes like shrimps, carnes (meats), chicken and the very popular ginga com tapioca are sold by vendors who ignore the food-vending prohibition on the beach. The beach management will not be responsible for people who get sick because of the food they bought, so you need to make sure that the food you’re buying is fresh and safe to eat.

For non-alcohol drinkers, there are coconuts and coconut water which vendors keep cool inside large Styrofoam chests filled with ice. Coconut water is a lot cheaper than soft-drinks and has beneficial health effects on the body.

There are also surfboard stalls where surfers can rent a board in Ponta Negra beach. They cost from R$5 to R$15 per hour depending on the size of the board.