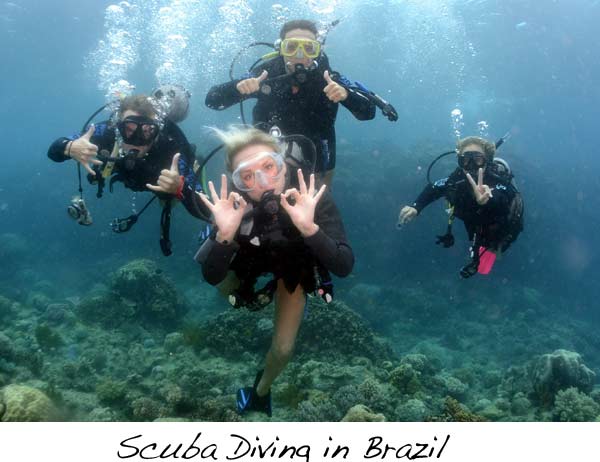 Whether you’re planning to bring your own snorkel mask or a complete scuba diving gear,  you can never go wrong when you embark on a Natal Brazil diving adventure. The warm crystalline waters of Natal in Brazil’s north-eastern coast has always been a favorite destination for snorkeling and scuba diving. Waters have the clearest visibility during the summer months of November to February, giving the visitors the best diving experience. The best diving spots in the vicinity of Natal are Maracajaú and Fernando de Noronha. These destinations both have diving operators that offer Natal Brazil diving  excursions, diving gear rental, and diving lessons for beginners.

The string of shallow coral formation (parrachos) which make up the Maracajaú Reef encircles Natal’s beautiful coastline like a huge sparkling necklace. Because of its pristine beauty that is untouched by urban development, it is no wonder that Maracajaú is sometimes referred to as the Caribbean of Brazil.

Maracajaú is best known to snorkelers and divers for its parrachos which is a local term for coral reefs. Located 7 kilometers off the coast, this large area of coral reefs known as Parrachos de Maracajaú form a shallow pool which draw in divers who are interested to explore the marine wildlife and plants found there.

The waters here has an average temperature of 26°C and the formation of corals encourage the development of rich marine plants and wildlife to turn this area into one huge ecological habitat. Both amateur and seasoned divers find this region particularly conducive to great Natal Brazil diving, thanks to its comfortable water temperature and clear visibility.

Maracajaú is known throughout Brazil as well as other countries for its Coral Reef Preservation Area. This rich yet fragile ecosystem extends nearly 700 miles outward into the ocean from the coast of Maxaranguape, which is 40 miles north of Natal. This reef area has warm water, numerous species of fish and other marine life, and four kinds of corals.

The fishing villages of Maracajaú and Ponta dos Anéis bay have been visited by a large throng of local and foreign tourists for many years. Fortunately, however, the region has managed to preserve its pristine beauty and rustic simplicity. This makes it an ideal vacation getaway that is easily accessible from Natal. 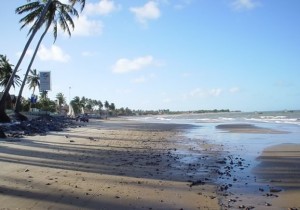 Diving in Maracajaú can provide amazing experience and enjoyable memories for the entire family. One of the nice things about going to this diving paradise is that its warm and shallow waters are safe for your kids. Tour operators in Natal and Maracajaú will give you ample information about Natal Brazil diving packages for the family.

Ocean pools in the parrachos form only in low tide and so snorkelers are advised to be aware of the coming in of the tide and rising of the water. Be sure to ask the diving operator about the tide condition to ensure safety in the water.

For those who would rather stay ashore instead of diving, there are floating platforms where they can watch all the fun and excitement. This alone is worth the trip.

The Archipelago of Fernando de Noronha is a mountainous cluster of 21 islands about 200 miles off Natal’s north-eastern coast. It is thinly populated and retains much of the serenity and beauty had when the first Portuguese explorers landed there in the 1500’s. This paradise-like playground for snorkelers and divers has been declared a National Marine Sanctuary.

Because of its location in the open ocean, the archipelago forms a safe haven for local marine life, migratory fishes and ocean mammals. This Natal Brazil diving destination has wonderful coral and volcanic rock formation, ocean-floor canyons and ancient shipwrecks. You’ll be able to explore wrecks up close, like a sunken Portuguese frigate, the Brazilian Navy Corvette Iparanga, and other interesting wreckage on the ocean floor. You will marvel at the brilliantly-colored rock formations that have been layered with sponges and provide a dazzling background for your underwater photos.

Wildlife in the region includes vibrantly-colored fishes, manta and sting rays, schools of barracudas, turtles, sharks and a permanent colony of wild dolphins. Your Natal Brazil diving tour will allow you to see the oldest and largest colony of spinner dolphins in the world at play in their long-time natural habitat. Enjoy an exciting dive with young reef sharks in their nursery and breeding area at Lage Dois Irmaos. Fourteen species of reef sharks breed here, allowing their young to swim with divers until they are old enough to swim into the open sea. Go at the right time and you can also participate in the releasing of hundreds of sea turtles into the ocean.

Because of its remoteness, not many visitors are aware that such a wonderful diving spot exists. Fernando de Noronha is virtually a hidden jewel of unequaled beauty and mystery. It has become a nature preservation site due to its teeming aquatic life. With a visibility of 50 meters on most days, it is considered as one of the planet’s best dive spots. That and its unrivaled scenery, the archipelago is right on top of the list for Natal Brazil diving of Brazilian and foreign travelers.