Home
Attractions
Forte dos Reis Magos in Natal – Is It Worth a Visit? 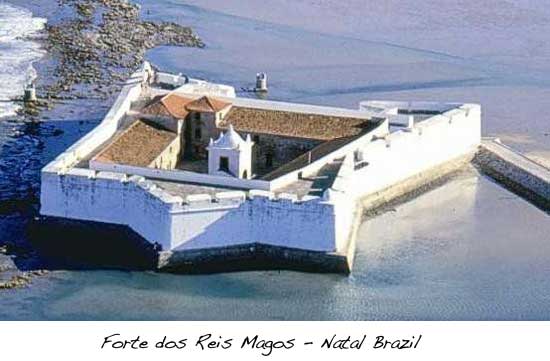 The city of Natal is not only famous for its exotic beaches and majestic sand dunes. It also has a rich and colorful past which many of its great historical sites and landmarks will attest to. If you are going to visit Natal Brazil, stuff one such historical attraction you shouldn’t miss is Forte dos Reis Magos, advice the city’s most important monument.

The Fort lies in the northern end of Praia do Meio on the way to Genipabu Beach and provides a good view to the city. It was strategically constructed on one of the banks of the Potengi River to provide the Portuguese settlers a clear view of any attacks from the sea as well as the jungle.

Forte dos Reis Magos is the oldest historical structure in Natal but still retains its original 5 star point shape. It was constructed by the Portuguese in 1598 to deter marauding French pirates from entering the coast, and became one of Brazil’s best defensive barricades during the colonial period.

The fort actually stands on the water, and can be accessed through a pedestrian walkway from Praia do Forte. For about three centuries, it was used as an administration center, military barracks and jail. Control of the fort was taken over by the Dutch on December 12 1633. They were driven away in January 1654 when the fort was attacked and recovered by the Portuguese with the help of native Indians.

Forte dos Reis Magos, the Portuguese term for Fort of the Three Wise Men, is detached from the city by a sand bar that disappears underwater during high tides. Its construction commenced on January 6, 1598, the day of Epiphany of the Three Kings as celebrated in Portugal, hence the name. The name also refers to the three huge statues at the fort’s entrance.

As a way to show Portugal’s occupation of Brazil, the Portuguese colonial marker Marco de Touros was brought to a beach north of Natal in 1501. The marker was later moved to Forte dos Reis Magos in the 70’s. The place where it originally stood, on the boundary of São Miguel do Gostoso and Pedra Grande, is now named Marco Beach (Praia do Marco) with a replica of the marker.

The construction of Forte dos Reis Magos took about thirty years. It was erected right over the reefs to ensure a firm foundation. Work was done when the tide was out, which made construction time longer and more difficult. It was made from materials which were shipped from Portugal which include huge stone blocks, bronze, sand and whale oil. Gaspar de Samperes, the priest architect who overlooked the fort’s construction, implemented the conventional design of a five-cornered star for a maritime fort. After several centuries, the fort is still in its original form.

The construction of Forte dos Reis Magos in 1598 was followed by the establishment of Natal on December 25, 1599. Natal means “Christmas” in Portuguese.

Visitors to the fort can join a guided tour for R$3 for adults and R$1.50 for children below 12 years old. The tour guides generally speak in Portuguese while some speak in Spanish. Unfortunately, that’s it. English and other languages are not spoken. It will be to your advantage to learn a bit of the Portuguese language to have some basic idea of what’s being said.

If you prefer to go on a tour without a guide, just let them know that you just want to explore the place and take photos. You can go around the fort and enjoy the sights without being bothered by guides. To get the best view for your photos, go to the top of the fort and aim your camera towards the direction of Praia de Meio and Ponta Negra.

All vehicles need to be parked outside on the street. This means you have to walk 500 meters via the walkway all the way to Forte dos Reis Magos. Walking to the fort is advisable during the day only and not at night for reasons of tourist security. The fort has art and souvenir shops, cafeterias and toilets. Wear a hat and sunglasses to protect you from the heat.

You can also get many local handicrafts and souvenir items at a cheaper price in stalls near the public parking area outside the fort. You can get one large or three small conch shells below US$5. Be aware, however, that some of the shells being sold in these stalls may have the stench of dead fish, so be sure to check with your nose before buying.

You will also notice some teens at the parking lot. They will offer to watch your vehicle for R$1 while you tour Forte dos Reis Magos. While there is no danger of your car being stolen in broad daylight here, it is advised that you shell out the cash. If you don’t, some of these kids are known to break into visitors’ cars, so it’s best to be safe for less than a dollar.