Brazilian Music is full of Passion, Energy and Enthusiasm, a wide variety of Brazilian Musical Instruments gives the music a very special and unique sound. The very first musical instruments used in Brazil were flutes, whistles , horns  and rattles along with some hands clapping and feet stomping. 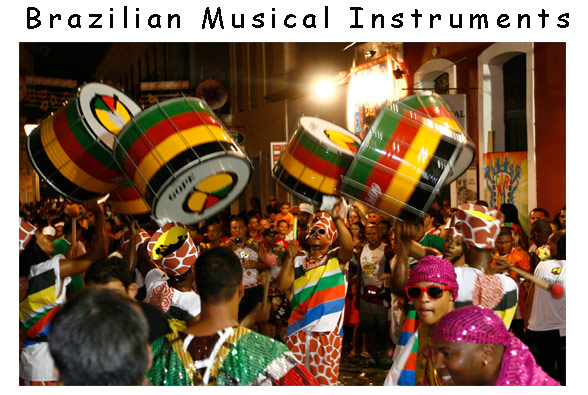 All about Brazilian Musical Instruments:

Berimbau – An African music instrument, the Berimbau is best known for its role in capoeira, an Afro-Brazilian martial art form. A brazil percussion instrument, this Brazilian musical instrument is made from a wooden bow which is about 4 to 5 feet long (1.2 to 1.5 m), a steel string and a gourd.

After tightly securing the steel string to the wooden bow from one end to the other, the gourd is attached to the bow. The Berimbau is played with the help of a small thin stick, which is called a varreta. The tone of berimbau varies from low, medium to high, as it does not depend on the size of the gourd or  the length of the bow, rather on the diameter and hardness of the bow’s wood and the quality of the gourd. Every part of the Berimbau has its unique role in the music and the rhythm it produces. You will see the Berimbau in all the Capoeira dance performances.

Atabaque – The Atabaque is a hand drum and has a Afro-Brazilian origin. Read more about Brazilian Drums here. There are three types of atabaque drums. 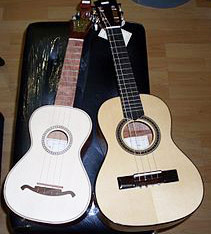 Cavaquinho – The Cavaquinho is a small guitar-style instrument. Cavaquinhos are made from wood and are outfitted with four wire strings. This small brazilian guitar type instrument is used often in Samba and Chorinho style music. When people see the Cavaquinho the first time, they think it looks like the Ukulele.

Cuica – the brazilian music instrument that sounds like a monkey

Other Types of Brazilian Musical Instruments: 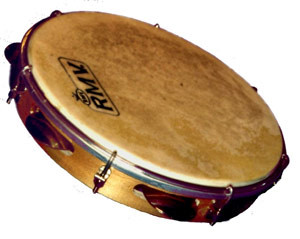 Pandeiro – A pandeiro is a type of hand frame drum popular in Brazil and is played by holding it in one hand and striking its head with the other hand to make music.  To create high or low pitches the head of a pandeiro can be adjusted. The pandeiro is surrounded with metal jingles that also can be shaken to produce sound. Different pandeiro patterns are played by alternating the thumb, fingertips and palm of the hand. Pandeiro is usually used in samba, choro, coco, and capoeira styles of brazilian music. 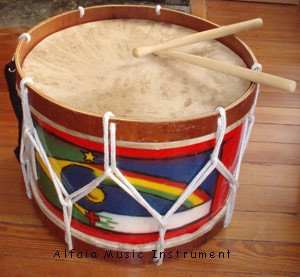 Alfaia – The Alfaia is a wooden drum which is made of animal skin that is tensioned or loosened through ropes placed alongside the body of the instrument. Macaiba wood is used to create the shell of these alfaia drum. Calfskin or goatskin is stretched over the head of the drum which is held securely in place with round wooden hoops. The Alfaia has a very deep, heavy sound different from other bass drums and they are mainly used in the northeastern folk rhythms and dances of Brazil, such as Ciranda, Maracatu and Coco-de-roda.

Ganza – The Ganza is cylindrical shaped music instrument made from plastic, metal or hand-woven basket materials. It’s filled with beads, metal balls, pebbles, or other similar items to create a unique shaker instrument.

They are usually used to play a rhythm underneath the rest of the band. Years ago the Ganza was brought to Brazil by African slaves and now is often played in samba music as an undertone.

Another Classic Video, where you can see a lot of Brazilian Musical Instruments ( Percussion Instruments ) in action is this Michael Jackson video, ( song: “they dont care about us” ) filmed in in Brazil, San Salvador de Bahia, at Pelhourino, with the famous Olodum band, percussion etc…Pop Music with lots of Brazilian Drums.. you can feel the energy people have in Brazil.

What instruments are used in samba?

A brazilian samba band has usually snare drums (Caixa), Tamborins, Agogo bells, Surdos, Ganzás or Chocalho (shakers), Cuíca, Timbal, Pandeiro, & Repinique.  At the beginning a samba band plays some whistles to give a beat, often played by the leader.

Samba bands you know from the carnival music, that is played by the samba schools of rio de Janeiro. Stringed guitars and other instruments have been added to the bands over the years. In other countries samba bands play more popular rythem like reggae, hip hop, and brazilian folk music. For around 300 Euros/Dolars you can get a set of drums

Do you know of another Brazilian Music Instrument? Please let us know in the comments.