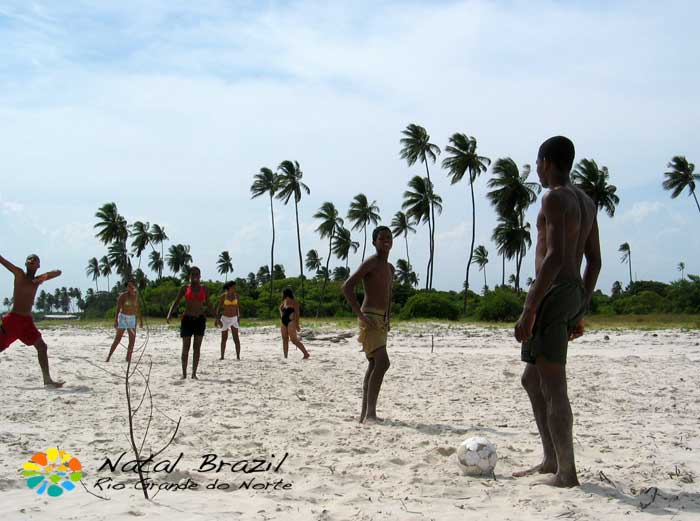 Americans call it soccer; it is called football in Brazil. It is the sport that ignites fiery passion in the hearts of Brazilians. Work in the country goes to a standstill during World Cup events. As it is all over the country, football is also the number one sport in Natal,  Rio Grande do Norte.

Brazilian football is played by everyone from young kids to adults to elderly people. Just take a walk in/any park, beach or open area in the city and, chances are, you’ll see people playing football in Natal. Any free space where a goal can be set up is a Brazilian football arena. The game also comes with some disputes and arguments but, in the end, it’s all clean fun for the football players involved.

Natal’s contribution to professional Brazil football is not that big. The more affluent teams from the south have better financing that enables them to find and train the best rookies, develop their game skills and, in due course, profit from them. Though Natal doesn’t create such a big wave in the Brazilian football scene, it does have has three professional clubs who have played at the Machadao footbalh stadium.

Nearly every Natalense is a die-hard fan of either ABC or América. Rio Grande do Norte’s state championship includes 10 contestants, with ABC and América as the standard-bearers. Most of the Brazilian football games were won by both teams.

Natal will get more public exposure in 2014 when it plays host to FIFA World Cup. Natal has been chosen as one of the 10 cities in Brazil to host this huge international sports event. Droves of foreign tourists, football fans and media people will gather in this city where new roads, hotels, infrastructures and tourist facilities have been constructed just for this event.

State-owned Machadão was a very popular sports stadium in Natal. It was named after the engineer who supervised the construction. The stadium was inaugurated in 1972 under the name of Estadio Joao Claudio de Vasconcelos Machado. It would soon be referred to as the Machadão. The stadium has hosted some of the biggest Brazilian football matches in the Lagoa Nova neighbourhood.

A few years ago, a sad decision had to be made. For Natal to qualify as one of the 12 host cities for the FIFA World Cup 2014 games which was to be held in Brazil, the city needs a modern and more spacious sports venue. It was decided that both the Machadão and the nearby Humberto Nesi Sports Hall had to be completely torn down to make way for the new structure.

Currently being finished on this site is the Estadio das Dunas sports arena. It name means Stadium of the Dunes since the sand dunes are one of Natal’s biggest tourist attractions. The Brazilian football stadium’s bold undulating structural design is also a tribute to the famous dunes.

David Beckham, popular product endorser and one of the most famous sports celebrities in the world, has revealed his plans to put up a football academy in the city of Natal. He describes the forthcoming academy as one of the world’s best. During his visit, he said that the city of Natal is filled with great potentials because of its growing economy, tourism industry and real estate investments.

Beckham feels that the city is a great destination that will draw in many celebrities and football personalities. Beckham is planning a scholarship program geared towards Brazilian children that will that will dynamically work with schools in the region. His goal is for children to have access to on-site Brazilian football coaching and other first class facilities, which is similar to the way his academies in London and Los Angeles are being operated.