For many travelers, visiting a country isn’t really complete without having a taste of its popular coolers and alcoholic drinks. Take Brazil,  for example. It is the land of beaches, samba, carnivals and a lot of partying. Surely it is not without its line-up of local Brazilian drink, refreshing beverages, alcoholic or not.

Many of the most popular wines and spirits are available in Natal. There are imported beer from Europe and the US, French wines, Scotch whisky, English gin, Russian vodka, and even Japanese sake. Most experienced travelers recommend buying your favorite drink by the bottle because it is always cheaper than paying for those expensive shots in a bar.

Cachaça is the native spirit of Brazil. It has remained unchallenged as the favorite Brazilian drink for more than 400 years. Cachaça is made from sugar cane using a process similar to rum-making. The difference is cachaça uses fermented and distilled sugar cane juice as opposed to rum which uses molasses which is a sugar cane by-product. Cachaça is often described as having a more robust and vegetal flavor which tastes better with a few years of aging.

Brazilian winemakers, with support from the government, are trying to sell commercially-produced and bottled cachaça to other countries, in the same way Mexico markets its tequila and Cubans their rum. Sales of this Brazilian drink are reportedly going up.

Low-quality yet highly intoxicating cachaça are sold cheaply at about R$2 per bottle to poor and low-income people, just enough to release the stress of a hard day’s labor. Cachaça can also be high grade and expensive, with the price determined by the process and materials involved in its production. You can sample a wide selection of cachaça in some of the finest restaurants in the city. 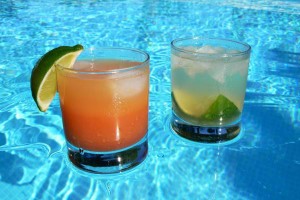 Caipirinha is the countryside version of a daiquiri. This Brazilian drink is made with rum, sugar and lime. The rum used, however, is cachaça and the sugar is usually turbinado or raw. The lime wedges are crushed and mixed in the drink. Caipirinha goes down more smoothly than cachaça since the sugar and lemon help take away the alcohol’s edge.

Here’s the right way to prepare a Caipirinha.

Combine sugar and lime wedges in a rocks glass. Use a muddler to press down and crush the lime to release oil from the peel and juice from the pulp. Toss in some crushed ice, add cachaça and stir. Top with ice cubes and serve with a straw.

Only by using cachaça can you make the authentic Brazilian drink Caipirinha. If cachaça is not available, you can use vodka or light rum instead. If you use vodka to replace cachaça, you will be making caipiroska. If you use other fruits instead of lime, the drink is called caipifruta. The preferred fruits for replacement are strawberry, grape, acerola or caju.

Another popular Brazilian drink in beaches that is sold by some ambulant vendors is hula-hula. This exotic drink is made of rum and coconut milk, and served with straw in a hollowed-out and nicely decorated pineapple. There is also a hula-hula drink based on gin and orange juice but it is not a genuine Brazilian hula-hula.

There are people, however, who won’t touch alcoholic drinks and would rather go for natural juices. Here are some of the most popular ones in Natal.

Coconuts offer the best of both worlds – the water and the pulp. If picked before it could fully ripen, coconuts contain a white fleshy pulp inside. These green coconuts also provide a refreshing sweet-tasting water. Just punch a hole through the coconut and drink the water with a straw. It’s a very healthy drink that requires no sweetener. After drinking the water, you can break the coconut open and feast on the sweet fleshy pulp inside.

There are a variety of juice flavoured drinks in Natal. If they are available, have fruits that are freshly juiced to get more health benefits. Here are some Brazilian fruits that are great for juicing.

Other fruits found in Natal that are also excellent for juicing are graviola, caja, seriguela, pitomba, poti, and mangaba. These fruits are also used as flavorings for ice creams and Brazilian drink.

Guaraná is a fruit that originally came from the Amazon. The juice derived from the fruit contains a small amount of caffeine which acts as a stimulant and energizer. A bottled drink made from guaraná is the only Brazilian drink that strongly competes with Coca-Cola in Brazil.

Açaí is another fruit that is gaining popularity in Natal and Brazil in general for its rejuvenating and disease-preventing properties.